turbines installed and connected to the grid

Noupoort Wind Farm, situated in the Umsobomvu Local Municipality, in the Northern Cape, has announced the completion of its first 14 foundations. Employing over 200 local workers, the wind farm finished its first foundation on 19 May, with all 35 foundations due for completion in just a few months from now. 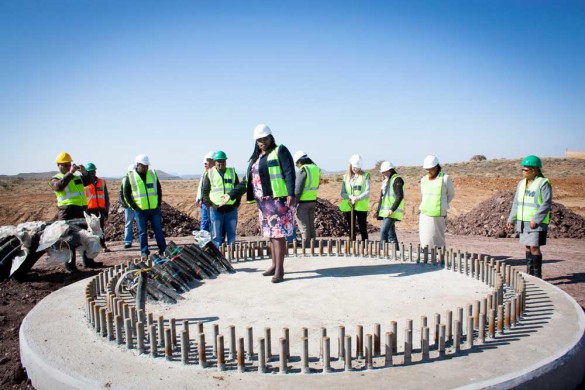 “Already many people are being employed 202 local people are working on the project including assembling the foundations for the wind turbines, almost a dozen of which have been cast to date. Employment of local labour will continue throughout the construction period,” said Project Manager of Noupoort Wind Farm, Martina Flanagan.

Noupoort Wind Farm is being built on an undeveloped site surrounding a small rural community, it will help boost the local economy and have a positive impact on the community. The project is ideally located with a great wind resource and it is situated 11 km from the Eskom 132kV overhead line which the wind farm will loop into.

The 80MW wind farm is expected to generate approximately 305 000 megawatt hours each year of clean, renewable energy to the national grid each year. When operating at full capacity, it is expected to supply enough green electricity to power approximately 70 000 average South African homes and avoid roughly 300 000 tonnes of carbon emissions each year when compared to traditional fossil fuel power plants.

The 99m turbine towers are to be manufactured at the new Gestamp Wind Turbine Tower Factory, in Atlantis, Western Cape. The blades, hubs and nacelles that compose the wind turbines, will arrive via the N9 from the Port of Ngqura in Coega, while the towers will be routed along the N1 from Atlantis. Delivery of the turbines is due to commence in October of this year.

“We are extremely pleased with the progress of the wind farm’s construction to date,” concludes Flanagan.

We use cookies on our website to give you the most relevant experience by remembering your preferences and repeat visits. By clicking “Accept All”, you consent to the use of ALL the cookies. However, you may visit "Cookie Settings" to provide a controlled consent.
Cookie SettingsRead MoreAccept All
Manage consent

This website uses cookies to improve your experience while you navigate through the website. Out of these, the cookies that are categorized as necessary are stored on your browser as they are essential for the working of basic functionalities of the website. We also use third-party cookies that help us analyze and understand how you use this website. These cookies will be stored in your browser only with your consent. You also have the option to opt-out of these cookies. But opting out of some of these cookies may affect your browsing experience.
Necessary Always Enabled
Necessary cookies are absolutely essential for the website to function properly. This category only includes cookies that ensures basic functionalities and security features of the website. These cookies do not store any personal information.
Non-necessary
Any cookies that may not be particularly necessary for the website to function and is used specifically to collect user personal data via analytics, ads, other embedded contents are termed as non-necessary cookies. It is mandatory to procure user consent prior to running these cookies on your website.
SAVE & ACCEPT